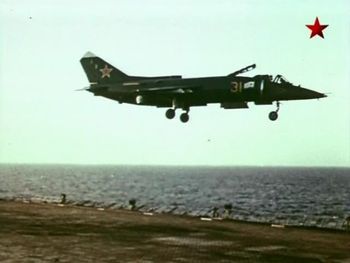 The Yakovlev Yak-38 was Soviet Naval Aviation's first and only operational VTOL strike fighter aircraft, in addition to being its first operational carrier-based fixed-wing aircraft. It was developed specifically for and served almost exclusively on the Kiev class aircraft carriers.

This page lists all films that feature the Yakovlev Yak-38.