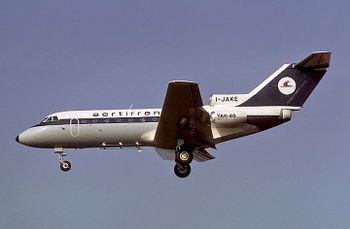 The Yakovlev Yak-40 (NATO reporting name: Codling) is a small, three-engined airliner that is often called the first regional jet transport aircraft. The Yak-40 was developed to meet a desire by Aeroflot to replace the Ilyushin Il-12, Il-14 and Lisunov Li-2, which, along with the An-2 biplane, served Aeroflot's regional and local routes. It was introduced in September 1968 with Aeroflot and met a great success as civilian and military aircraft in many foreign countries. More than 1000 have been produced, and about 400 are still in service in 2011.

This page lists all films that feature a variation of the Yakovlev Yak-40.

The following 37 pages are in this category, out of 37 total.