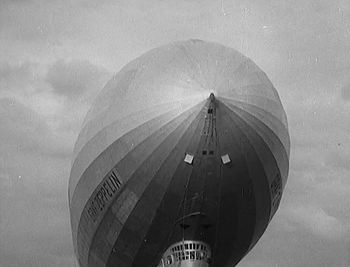 LZ 127 Graf Zeppelin (Deutsches Luftschiff Zeppelin #127; Registration: D-LZ 127) was a German built and operated passenger-carrying hydrogen-filled rigid airship which operated commercially from 1928 to 1937. It was named after the German pioneer of airships, Ferdinand von Zeppelin, who was a Graf or Count in the German nobility. During its operating life, the airship made 590 flights covering more than a million miles. It was designed to be operated by a crew of 36 officers and men.

This page lists all films that feature the Zeppelin LZ 127 Graf Zeppelin.

The following 2 files are in this category, out of 2 total.