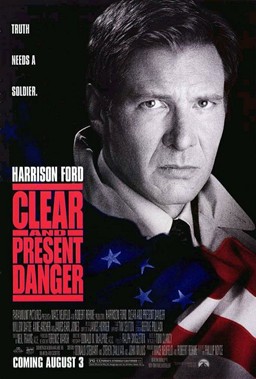 When Ryan is thrust into the position of Deputy Director for Intelligence in the CIA, his first task is to investigate the murder of a prominent U.S. businessman, and personal friend to the President, and his family. However, when the findings show links to the Colombian drug cartels, the administration's political priorities suddenly take a sharp change in direction. With everyone talking in riddles, a covert operation is set up by the CIA, behind Ryan's back, to infiltrate the cartel's operations but when things start getting messy the policy quickly shifts to 'Cover Your Ass'.

Seen in the background.

This Bell 205 is attempting to impersonate Marine One, a Presidential helicopter. Although HMX-1 did operate VH-1N (twin-engined) for a short while, they never operated the single engined variant, and no other unit operated in this livery.

Special Operations variant of the UH-60 Blackhawk. Used to insert the infiltration team into Colombia.

Most likely a model that is blown up.

This aircraft is seen twice with two different, false, registrations. There were only 52 of this exact model aircraft made. The first is 'N9747P', a regularly used fake registration.

The aircraft on approach, but could be a different one. General characteristics match.

Seen through the Hawker 1000's window.

3 707s of Ecuatoriana de Aviación on the ramp on the right. Scene filmed at Quito International Airport, Ecuador.

2 Ecuadorian Air Force C-130s can be seen in the background as well.

Out of focus so can't positively make out the registration.

Operating from the U.S. aircraft carrier.

Now relieved of the Cellulose Encased, Laser-guided bomb, from under it's right wing.

Used by Cortez to scout the location of the Special Ops team.

This exact footage is also used in Mr. & Mrs. Smith, with some minor editing.