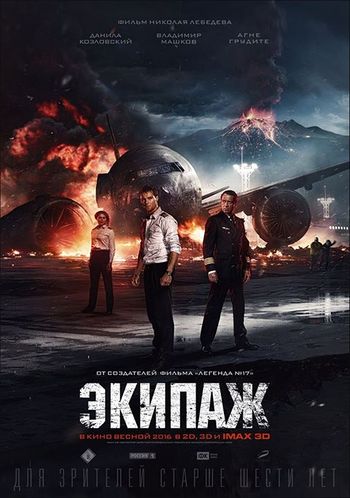 
A 2016 remake of 1980 Soviet classic. A young pilot, who is fired from military for his not-always-welcomed honesty and morality, is accepted as a trainee into a commerical airline.

The main aircraft featured in the film is Tu-204SM registered RA-54151 (serial 64151), painted in the colors of a fictitious airline Pegas Avia (the actual plane is owned by Tupolev company). A CGI model was used in some scenes.

Another scale model of Tu-204.

A Tu-154M reg. RA-85796 (serial 94A980) is burning in a fictional Kanwoo airport. The plane, which was destroyed in the filming process, was previously owned by Kosmos Airlines, hence the name of a fictional air carrier Osmo made up by removing the first and the last letters in the word "Kosmos" of original livery. The filming of the Kanwoo disaster scene took place in Zhukovsky airport.

Tu-134A-3 of fictional airline LodAir and fake registration JI-78040 seen behind. The actual aircraft used was RA-65606 (factory number 46300) owned by Tupolev company. A bunch of aircraft tails is seen on the background, among them a tail of Tu-144 CCCP-77115, stored in Zhukovsky.

One of the scenes briefly features Tu-104B installed as a monument near Vnukovo airport. This plane with a serial number 021905 displays tail number СССР-Л5412, although its actual registration was СССР-42507.

Same An-12 rendered in a CGI scene.

An-12BK in colors of fictional airline YouAir and fake registration KY-201409. Actual aircraft was RA-13331 with factory number 6344510, it was used as a flying lab for testing anti-icing systems. This An-12 was also burned during filming. The plane on the right is a metal mock-up constructed for the movie (see Discussion tab for more information).

In a CGI scene.

A military training version of MiG-25. This is one of the planes that were used during Buran program.

Boeing 737-800 VQ-BUL (s/n 41707) near Vnukovo terminal. The scene was digitally altered to “paint” this UTair aircraft (which has mostly white livery with grey lower part of fuselage) into Pegas Avia colors. This also presents a break in continuity, as Tu-204SM appears in all other sequences of this scene.

Another Utair Boeing 737 appears on the advertising poster on the wall.

Boeing 737 of Utair on the poster.

Grudytė’s character inside the cockpit of Boeing 737.

Two 737s of Transaero and UTair parked near Vnukovo terminal. The hue of Transaero’s fin colors was changed to make them look green and yellow instead of recognizable red and blue.

B737s of Transaero and UTair

Transaero’s Boeing 747-400 in the lower part of the screenshot. All markings of Transaero were digitally removed everywhere throughout the film, most likely due to them not buying an advertising contract. The airline was still in existence during filming, but was already defunct when the movie was released.

An inflated model of Boeing 747 in Transaero colors hangs under the ceiling.

A Boeing 777-300 of Aeroflot, seen from Aeroexpress station in Moscow-Sheremetyevo International Airport (SVO/UUEE).

The aircraft in the “near miss” CGI scene is an Airbus A320, although it is incorrectly called “Turkish Boeing” in the movie.

A320 of fictitious airline “Air Fair”.

A stand model of A320 in the right section of the screen.

A330-300 of Aeroflot seen from Aeroexpress terminal in Moscow-Sheremetyevo International Airport (SVO/UUEE). Some other aircraft are seen in the rear of this scene, including a taxiing A320, Boeing 737 and Boeing 747.

One the top photo, two scale models can be seen : first one of Il-18, and second one of Il-62. Read the discussion tab about this photo.
The bottom photo shows a Sukhoi Superjet 100-95 on the background.

Seen on the photo.

Many various planes on the photographs, as well as one stand model. Read the discussion tab for more complete data.

A stand model inside Vnukovo terminal. Most likely Airbus A300 or A330.

An airplane takes off in Vnukovo, is too far to reliably identify. The livery looks like that of Air Berlin (which had flights to VKO), but it could be digitally altered.

An aerial shot of Vnukovo shows lots of various aircraft from different airlines.