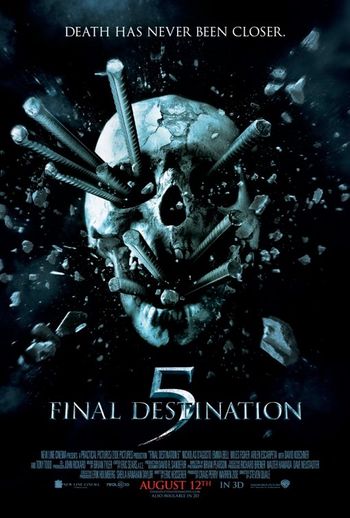 During a bus trip with his friends, Sam Lawton get's a premonition of a bridge collapse, killing him and all the others in the bus. When the bus stopped at the bridge, he and seven others get off the bus. Seconds after, the bridge collapsed. The survivors are happy to live, but when one of the survivors dies in a strange accident Sam recognizes that Death had not finished yet.

Boeing 747 of movie airline Volée Airlines. While on on the aircraft, Sam hears about a premonition another passenger had that the plane will blow up. Moments later, the plane began to explode. Seen at John F. Kennedy International Airport.
This is the same flight as seen in Final Destination.

Two Boeing 777 of Emirates Airlines can be seen in the background at John F. Kennedy International Airport while Flight 180 takes off.