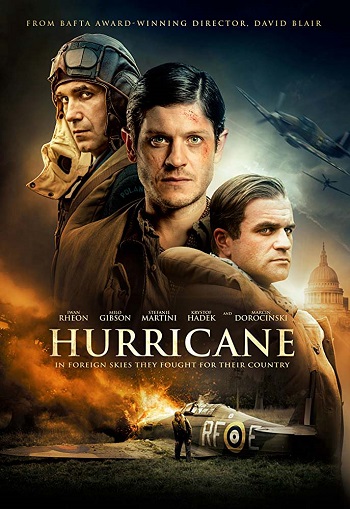 Disambiguation : two Polish movies on the same thema were issued at the same date; the other one is Dywizjon 303. Historia prawdziwa.

The exploits of 303 Squadron RAF during the Battle of Britain. The squadron consisted of Polish pilots, many of whom were veterans of the air battles involved in Germany's invasion of Poland.

Seen in the mist, several French aircraft including at least one Morane-Saulnier MS.406 (just at the right of Jan Zumbach's head). CGI of course.

Registration G-AXNW, c/n 0381 built in 1952. Aéronavale markings applied to portray a French aircraft which Zumbach steals and flies to England (*) at the beginning of the film.
(*) which is false : on 18 June 1940, Zumbach travelled to England by boat.

One functioning Hurricane was used in the film, registration G-ROBT, serial P2902 built in 1939. It is seen with codes RF-E, RF-T, and RF-R, mainly during ground scenes.

Largely portrayed by replicas and CGI.

Portrayed exclusively with replicas and CGI.
Insignia of JG 51.

Stock footage (perhaps the same one used for The First of the Few (fourth image)).

Chased by a Hurricane.