Indiana Jones and the Kingdom of the Crystal Skull 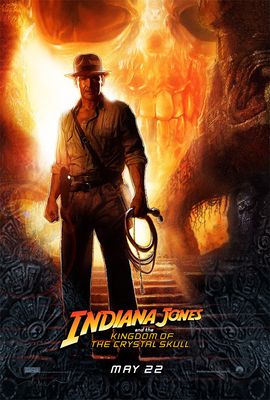 Theatrical poster for Indiana Jones and the Kingdom of the Crystal Skull.

When an old friend of Jones is kidnapped he travels to Peru following his clues to find a mythical object which has the potential for tremendous power. Along the way he is reunited with old friends and new foes, all with different agendas.

Registration NC33613 was an actual aircraft operated by Pan American Airways System. Built in 1941, its last registration was XC-BNO.

Apparent false registration N48550, Pan American Grace Airways never operated the An-2. In fact, the use of this aircraft is completely impossible in 1957, as the An-2 is a Soviet-produced aircraft. In reality, this aircraft should have also been a DC-3, or even a Grumman G-21 Goose or Consolidated PBY Catalina.

Flying over the Nazca lines, Peru. In reality the lines are nowhere near this close.

CGI adaptation of the An-12. Some quite significant differences, especially with the engines, but the basic structure is identifiable. Possibly a ficticious aircraft representing the Soviet Air Force, as the AN-12 was had not yet been adopted by the Soviet Air Force.