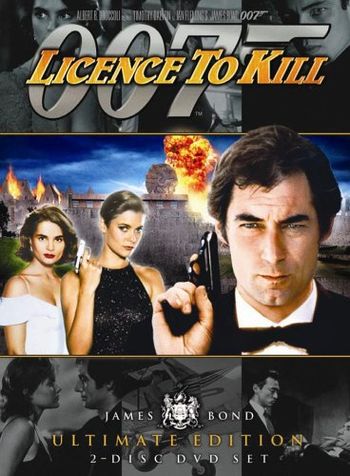 James Bond is in Miami to attend the wedding of his CIA friend Felix Leiter. Bond and Felix had just arrested the South American drug baron Franz Sanchez when he escaped to get his revenge on Felix. Bond learns of Sanchez' escape and rushes to Felix's house to find his wife dead and Felix himself in pieces, but alive. Bond decides to go against his commander's orders and sets out to kill Sanchez and destroy his drug empire.

Seen at the beginning of the movie, where the crew spots Sanchez' flight.

Landing on an island

James Bond, Felix Leiter and a few DEA agents use this helicopter to trace then chase Sanchez. Once they catch up with him, Bond lowers himself down and hooks the Cessna onto the helicopter. USCG registration 6574, c/n 6270.

Seen again in a later scene where Sanchez escapes

One of the many planes seen on the island airstrip.

Seen again in a later scene

Bond uses a harpoon gun to shoot one of the floaters, enabling him to waterski after the plane. He eventually manages to catch up, climbs aboard and throws both the pilots out. Registration N6964N, c/n 185-04318.

Pam's airplane, which some of Sanchez's mechanics are seen dismantling in an effort to stop her following Bond.

"What are you doing to my plane?!"

Pam steals the aircraft as a compensation for her Baron. She lands it near the drug plant, helps Bond, then gives him a lift to catch up with Sanchez' convoy. Later on, the plane is shot down with a stinger-missile. Registration: XB-LOX.