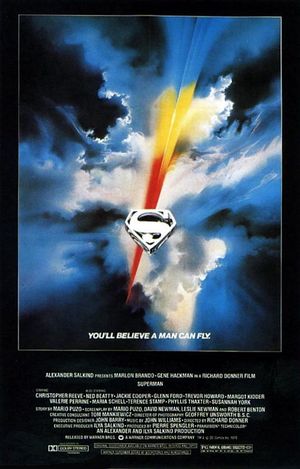 An infant boy, Kal-El, is sent by his parents from the dying alien world of Krypton before it explodes. On Earth he is adopted by the Kents and raised as Clark in Smallville, Kansas. After the death of his adoptive father Clark discovers his alien heritage and that he has powers. Getting a job as a reporter for the Daily Planet in Metropolis, Clark does good deeds as his superhero alter-ego Superman and eventually goes up against the master criminal Lex Luthor who plans to sink all of California into the Pacific.

A Daily Planet helicopter carrying Lois Lane crashes while trying to take off from the rooftop helipad and falls off the building. Superman catches it. Same footage re-used in Superman II.

Air Force One is flying over Metropolis during a thunderstorm and loses an engine after it is struck by lightning. Superman grabs the wing and stabilizes it, allowing the pilots to land. Except for cockpit shots, the plane is represented entirely by a model.