This shot is heavily digitally modified ... but failed to show the terminal building in its 1957 state.

In 1957, a wide car park was in front of the terminal ... without these white letters (a feature of the next century). Access to the terminal was at level without the four steps sen here. Colonnades and glazing are slighty different and the three statues are right but they should separate the two accesses (arrivals and departures) instead being over.

A bird's eye view of the mid 1980s (before the car park becomes a wide pedestrian zone with a small parking lot) with the red zone being this targetted by the scene : 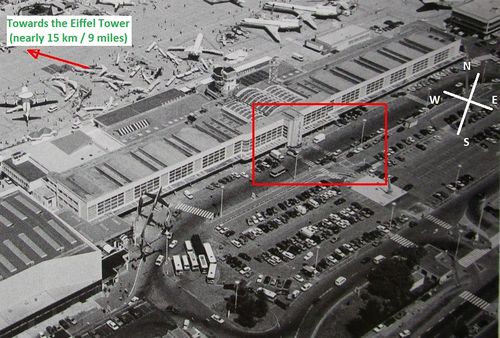 Another mistake ... Mrs. Harrys turns herself to the right and sees the Eiffel tower, so she's looking to the East. Even if she turns to the left, the Eiffel Tower couldn't be seen outside the terminal on the town side (i.e. from the car park) but only from the tarmac.
That's why we put the CGI template.
LVCDC (talk) 07:12, 14 August 2022 (MDT)