Terminator 3: Rise of the Machines 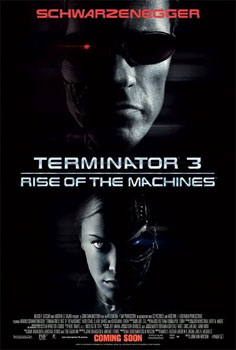 Theatrical poster for Terminator 3: Rise of the Machines.


After failing to kill Sarah Connor and her son, Skynet sends the latest Terminator, the T-X, after other Resistance officers. However, the Resistance sends back its own reprogrammed Terminator to protect John Connor and as many of the officers as possible. Connor decides they must attempt to destroy Skynet and avert Judgement Day.

Seen at departure and at landing.

Seen at departure and at landing.

Seen in flight only.