A friend of mine who is into planes thinks Valmont's private plane is a Fokker 50. Anyone else? - Kooshmeister

1st pic make me thinking of a Nieuport or a Sopwith. 2nd and 3rd, ressembles to an american Boeing or Curtiss, unfortunately I couldn't find any matching with this one Sixcyl 15:41, 8 February 2011 (MST)

The first pic is a Thomas Morse S4. A beautiful American plane, intended as scout in the late IWW but used as trainer. You could recognize she by the protruding "half cone" from behind the rounded cowling. --Madcamps 05:38, 3 November 2011 (MDT)

Good find! it's said that it was "designed by Englishman Benjamin D. Thomas (no relation) formerly of the Sopwith Aviation Company". I understand why I found it louking like a Sopwith. Thank's again for this info! Sixcyl 12:04, 3 November 2011 (MDT)

The first three photos that were unidentified showed a Lockheed Martin F-35 Lightning II. I have updated the movie page and removed the unidentified photos.

Image 2 is the Bell X-2 experimental supersonic aircraft. It was the immediate follow-on to the Bell X-1/X-1A and was the first aircraft to exceed Mach 2 in level flight. --CAPFlyer 16:22, 19 September 2011 (CDT)

Images 6-9 are of the ML Aviation Inflatable Wing Aircraft, designed in the 1950s for a US Military requirement for a "survival aircraft" able to get a downed pilot out of hostile territory. Other entrants included the somewhat more successful Goodyear Inflatable Airplane. --CAPFlyer 16:22, 19 September 2011 (CDT)

Image of the carrier jet with the 23 under the cockpit is a McDonnell F2H Banshee. She was a carrier fighter-bomber operated by US Navy and the Canadian Navy. Parked Banshees can be seen in The Bridges at Toko-Ri movie --Madcamps 11:35, 2 November 2011 (MDT)

Aircraft in first picture is of a Republic F-84 Thunderstreak. Cannot determine variant due to lack of reference of wing and nose. --CAPFlyer 16:22, 19 September 2011 (CDT)

Airlifting: Now and Then

From Here to Eternity

Thank you very much for this big help CAPFlyer. Impressive is your knowledge! Sixcyl 16:34, 20 September 2011 (MDT)

The Story of Aviation

Images 18 to 22: Beardmore Inflexible. A one-of-a-kind british bomber of the late twenties. Nevertheless her name, surely she was pretty flexible because the unusual high aspect ratio. --Madcamps 12:01, 2 November 2011 (MDT)

Many thanks to Christian who helped so much on some identifications in : The Saint Strikes back, Sous le signe du taureau, Singin'in the Rain, A Decade to remember, I tre aquilotti.Sixcyl 16:24, 29 November 2011 (MST)

Tremendous downsizing of the Unidentified aircraft list with the help of Christian. Good work!!!Sixcyl 01:02, 10 December 2011 (MST)

I don't agree with you, I'm afraid. The windows shapes and density doesn't match at all with DC-8. This is rather wide body airliner, Boeing very likely.Sixcyl 00:17, 13 March 2012 (MDT)

If someone will help me verify this, I am quite certain the unidentified aircraft is in fact not CGI, but a Boeing 777. As seen in this photo I found from a google search of 777s landing,Triple 7 it appears to be exact. I was unable to find a comparable photo to reference with the first shot drumaboy590 0:17, 20 March 2012 (CST)

The Shoes of the Fisherman

That is not PeaceKeeper as suggested under the picture. That will be Naval Polaris Mk.3 or more precisely UGM-27C Polaris A3. RenoRacer 09:46, 19 April 2012 (MDT)

Look at http://www.airport-data.com/aircraft/photo/330470.html
Despite the C-GIID registration (instead of N-GIID), I think we have found the real aircraft disguise with a false tail number.
Bellanca 8KCAB, C/N: 1025-2006.

Please note that these two planes are based in Ontario.


The twin engine just behind the actress is a Beech 55 Baron, isn't it ?

Out for a Kill

First unidentified aircraft could be a Bellanca Pacemaker 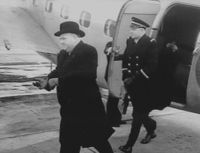 The first man is Édouard Daladier who is well known for his flight to Munich at the end of september 1938, done with the Bloch 220 F-AOHJ but the karman visible is not from this plane.
Lockheed Model 14 Super Electra G-AFGN was then used by Chamberlain (but why 2 frenchmen are coming out from it ?). It could be too the Air France same type of aircraft used on other circumstances (and then the wing suits well).


The following picture is taken during Iraq invading Koweit : they are Mil Mi-8 helicopters.LVCDC 17 february 2013