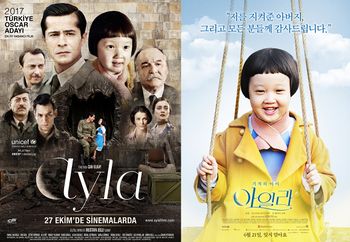 Korea 1951 : a night patrol found a young Korean orphan kid who quickly becomes the mascot of the Turkish expeditionary corps of the United Nation forces. Several months later, the substitutive father must come back home ...

On the very beginning of the Turkish arrival on the Theater of Operations, the base is straffed by Northern forces. Only grey arrows split the skies. In 1950, they probably were Ilyushin Il-10s or Lavochkin La-7 or Yakovlev Yak-9 fighters.
These CGI are probably based on some radial Yakovlev (Yak-18 or Yak-50).