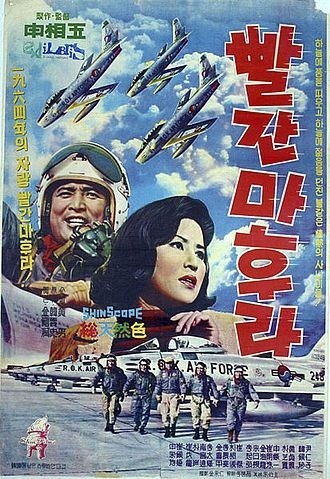 Despite action is set during the Korean War, ROKAF is shown using jets (this was not before several years after the cease fire).

Seen at the beginning.

Two of the element taking off (43 min.) are these F-86D seen only from the rear. Note the different squadron colors applied on the tail.

MiGs are first acted by Republic F-84F Thunderstreak (in fact, shots reused from The Hunters).
Same aircraft in other movies at IMPDb: Frequently Seen Aircraft.

From this point, two F-86s are dogfighting, one with red wingtips to act the adversary.

The movie is ending by an Air Force Parade.

Seen in several in shot : diamond, massive parade, firing rockets then dropping napalm.
At least forty Sabres in the sky !

Desk Model and so on

Commanding Officer's desk is set with ...