Disambiguation : this page is about the Bollywwod Movie ; for the TV Series, look at The Border. 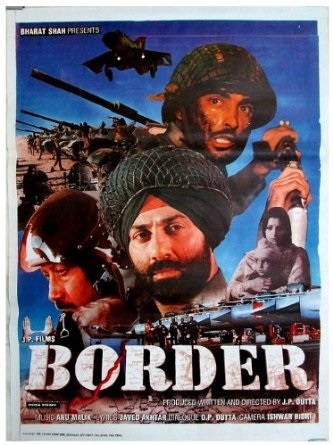 Bollywood War film based on the Indo-Pakistani War of December 1971, especially the battle of Longewala.

A desk model with a HAL HF-24 Marut diving on a main battle tank. Looks like a memory trophy to celebrate the battle of the 5th December 1971 ... as the Squadron leader is just receiving his orders from the Wing Commander some days before the battle !

The desk model in front of the left window is probably a B-24 (twin tail, probably four engine aircraft).

Paskitani aircrafts are just shown by night.
Probably a Mig-21.

The type was decommissioned the year the movie was shot. Hunters of No.20 Squadron Lightnings.
Several serials seen like A476 :

Last but not least, a CGI shot which ends the battle.