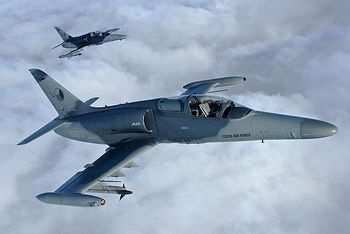 The Aero L-159 ALCA (Advanced Light Combat Aircraft) is a light subsonic attack jet and advanced trainer developed in the single-seat L-159A and two-seat L-159B versions respectively, produced in the Czech Republic by Aero Vodochody. In 2003, the Czech Air Force fleet of 72 L-159A aircraft was reduced to 24 due to budget constraints. After several years of storage, the government has re-sold most of the redundant aircraft to both military and civilian operators, namely the Iraqi Air Force and Draken International.

This page contains all films, TV series, and video games that feature the Aero L-159 Alca.