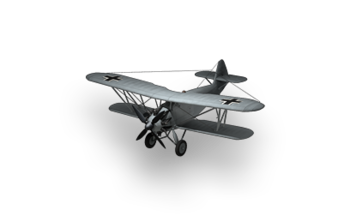 Arado Ar 65 in World of Warplanes.

The Arado Ar 65 was the single-seat biplane fighter successor to the Ar 64. Both looked very similar. The only major difference was the use of the 12-cylinder inline versus the 64's radial. The wingspan was also increased.

The Ar 65 appeared in 1931 and six models were built. The first three 65a-cs were prototypes, while the 65d-fs were production models. The Ar 65d was delivered in 1933 and served alongside the Ar 64 in the two fighter groups - Fliegergruppe Döberitz and Fliegergruppe Damm. In 1935, the Ar 65 was reduced to a training aircraft. Production of the fighter was discontinued in 1936. However, the next year, 12 of them were presented to Germany's ally - the Royal Bulgarian Air Force. The final production total was 85 aircraft.

This page contains all films, TV series, and video games that feature the Arado Ar 65.