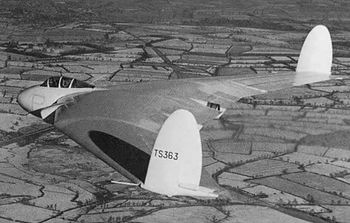 The Armstrong Whitworth A.W.52 was a British flying wing aircraft design of the late 1940s for research into a proposed flying wing jet airliner. Three aircraft, the A.W.52G glider and two jet-powered research aircraft, were built to support the programme. Further development of the airliner was discontinued, but research flying continued until 1954.

This page contains all films, TV series, and video games that feature the Armstrong Whitworth A.W.52.