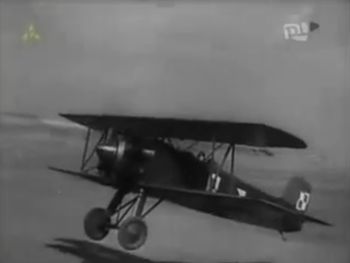 The Avia BH-33 was a biplane fighter aircraft built in Czechoslovakia in 1927. It was based on the BH-21J which demonstrated promising results by combining the original BH-21 airframe with a licence-built Bristol Jupiter radial engine. Other than the peculiar Avia hallmark of having an upper wing with a shorter span than the lower, it was utterly conventional, even featuring a tail fin for the first time in a Pavel Beneš and Miroslav Hajn design (previous aircraft had a rudder but no fin).

This page contains all films, TV series, and video games that feature the Avia BH-33.