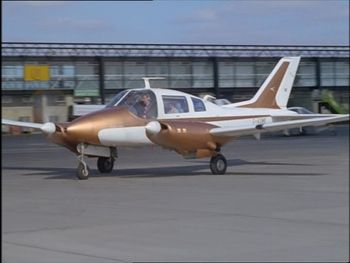 Beagle B.206 Series 2 model in Look at Life: Flying to Work.

The Beagle B.206 Basset is a 1960s British seven-seat twin-engined liaison and communication aircraft built by Beagle Aircraft Limited at Shoreham Airport and Rearsby Aerodrome. The aircraft had two main variants, the Series 1 and the Series 2 (initially known as the B.206S). A Series 3 started development, but only 2 were built. They were operated as civilian craft and by the Royal Air Force, specifically by communications squadrons. A total of 80 were built.

This page contains all films, TV series, and video games that feature the Beagle B.206.