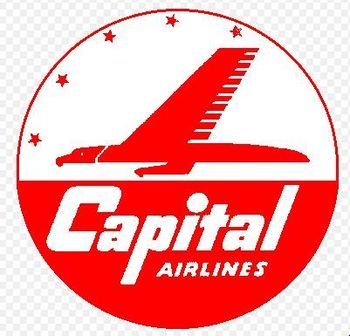 Capital Airlines was an airline serving the eastern United States that merged into United Airlines in 1961. Their primary hubs were National Airport near Washington, D.C., and Pittsburgh. In the 1950s they were the largest US domestic carrier by passenger count (and sometimes by passenger-miles) after the Big Four: American, United, TWA, and Eastern Air Lines. The beginning of the history starded in 1926 as Clifford Ball Airline which began operating between Pittsburgh and Cleveland, Ohio. Ball sold his interests in 1930 to Pittsburgh Aviation Industries Corp., and the airline became Pennsylvania Air Lines (PAL). PAL was reorganized as Pennsylvania Airlines after the Air Mail scandal of the early 1930s. Central Airlines, otherwise notable for hiring Helen Richey, the first female commercial pilot in the U.S., became PAL's main competitor after their founding in 1934. The two companies merged to form Pennsylvania Central Airlines, or PCA, on November 1, 1936. In 1941 PCA moved their headquarters to the new Washington National Airport in Arlington, Virginia, becoming one of its three original tenants; PCA had been consulted during the airport's design. The row of office buildings next to its hangars became "mahogany row" and the airline adopted the slogan "The Capital Airline," with its aircraft dubbed "Capitaliners." By 1947 their route network no longer reflected their name, and on April 21, 1948, the airline adopted a new insignia, colors and name: Capital Airlines. The company merged with United Airlines in 1961.

This page lists all films, TV series, and video games that feature aircraft of Capital Airlines.