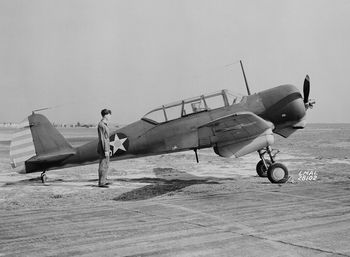 The Curtiss-Wright CW-22 is a new design based on the CW-19 trainer. The landing gear is no more fixed but is retracting rearward into underwing fairings. The powerplant is still an air-cooled radial engine but no more with seven cylinders : the new Wright Whirlwind got 9 cylinders. The Royal Netherlands East Indies Army Air Force was he first customer but the Japanese expansion overran the Dutch territories and those 36 airframes felt into ennemy hands, some supposed being used by their Air Force. On the other side of the Pacific, around a century airframes of an improved variant (CW-22B) were sold to some LATAM countries and Turkey. But most of the production (305 airframes) was of an unarmed variant dedicated to the U.S.S Navy need, the SNC-1 Falcon.

Production of the SNC-1 Falcon and others CW-22 variant led to a total close to 450 airframes.

This page lists all films that feature a variation of these aircraft.