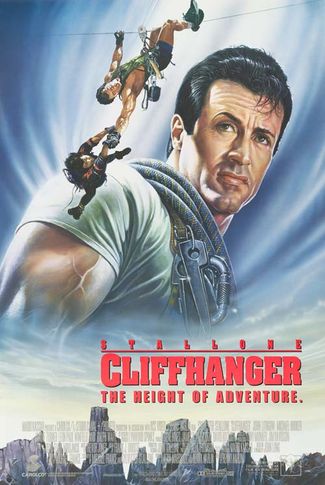 Mountain rescue worker Gabe Walker returns to his hometown in the Rockies after an incident involving a hiker he failed to rescue left him traumatized. Mustering his courage he joins Hal Tucker, with whom he has a strained relationship, to go and find a group of stranded hikers.

Helicopter used by the Rocky Mountain Rescue team. Later stolen by the hijackers and flown by Qualen, it crashes down the side of a cliff in the climax.
Same footage used in other works at IMPDb: Frequently Seen Aircraft (Civil Fixed-Wing).

Treasury jet. The target of a daring midair hijacking by a gang of robbers. Explodes in midair after Travers plants a bomb aboard it. Registration N1295L, c/n 47525 built in 1971.

Registration N680TT, c/n 5108 built in 1968. Qualen's jet. Used in the aerial hijacking. Crashes after the hijacking goes wrong due to Agent Matheson shooting at it.
Same footage used in other works at IMPDb: Frequently Seen Aircraft (Civil Fixed-Wing).

Treasury helicopter. Used by Wright and his assistant Davis to fly out to the mountains.