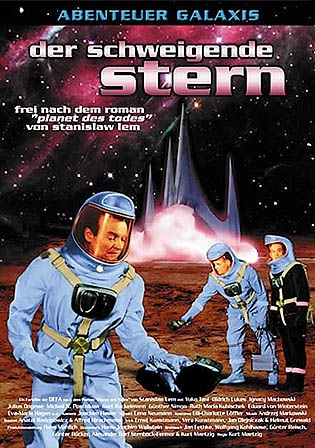 
In the desert of Mongolia, a extra-terrestrial object is found. Scientific community defines its origin from Venus and considers it as a message. A rocket intended for Mars is actually dedicated to Venus, manned by a team of eight scientists from all the world.

Aircraft in markings of the Luftstreitkräfte der Nationalen Volksarmee (Air Force of East Germany) are not seen every day in movies. But when the emblem of the LSK is devoided of the national emblem of the German Democratic Republic, it's quite rare as this was just between 1st March 1956 and 1st October 1959.

The ground vehicle used on Venus is a four places car with a 'Little Rocket' on its top, manned by a single passenger.

Seen on Earth only, this Elastocopter.