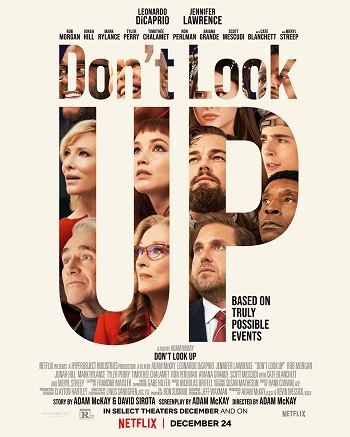 Two low-level astronomers must go on a giant media tour to warn mankind of an approaching comet that will destroy planet Earth.

Later, a fictional AWACS variant with a radome is seen.

(far left) tail unit of what seems to be a Gulfstream G550 (reverse's shape on the engine matches) with registration ending by ...C.

(mising screenshot) The winglet seen in background of the Bash probes / mining robot are those found on Gulfstream III and Gulfstream IV.

How surprising to see Janie Orlean (Meryl Streep acting as President of the United States) flying this helicopter due to be phased out in 2023 after six decades of Presidential service.