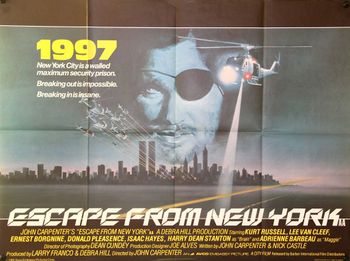 1997 : Manhattan is a giant prison, cut from the rest of the world. Unfortunatly, the presidential aircraft fall down there and it's time to recover the First American. A convicted bank robber is sent in for a rescue mission.

Fictionnal Aircraft acting as the Boeing VC-137 Air Force One

A model based on the nose of a Boeing 707, the tail of a Convair 240 but with the jet engines put like a DC-9 and clean wings.

On the radar screen, the same aircraft is depicted like a Boeing 737 or so.

A derelic and scrapped aircraft acting as the crashed VC-137.

The instrument panel is highly irrealistic even for a glider of the next future of sixteen years !

A light aircraft is quickly seen towing the IAR glider.