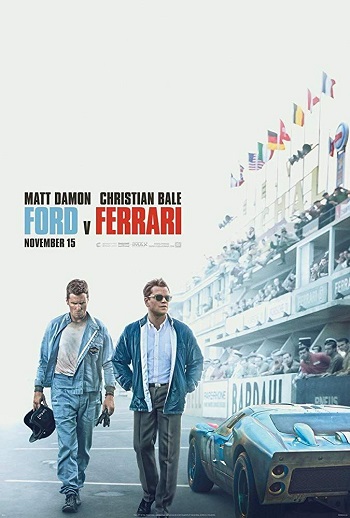 American car designer Carroll Shelby and driver Ken Miles battle corporate interference and the laws of physics to build a revolutionary race car for Ford in order to defeat Ferrari at the 24 Hours of Le Mans in 1966.

Registration N7264U, c/n 21411/1346 built in 1978 for United. Based at Ontario International Airport (ONT/KONT) in California, where this was filmed (standing in for LAX). Same aircraft in other works at IMPDb: Frequently Seen Aircraft (Civil Fixed-Wing).
First seen with TWA-Trans World Airlines logos applied.

Later seen with no logos.

Again in the background with no logos.

Several CGI airliners seen in the distance at "LAX" (really Ontario International Airport). The closest aircraft's livery is unknown, but the further ones all have the classic Delta livery.

Photo on the left.

CGI airliner seen for a split second while Shelby is giving Henry Ford II a test drive; appears to be a Boeing 727 with two additional wing-mounted engines.