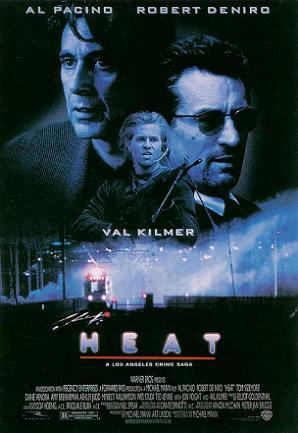 Neil McCauley is a hardened professional criminal who has spent many years behind bars and is determined never to go back. A highly focused loner, McCauley's protection is that there's nothing in his life that he can't walk away from in 30 seconds flat. Vincent Hanna is a lieutenant of detectives in LAPD's Robbery/Homicide Division who searches through the remains of a crime for the scent of his prey and then hunts them down. Those are the elevated experiences of his life--the rest is disorder. When McCauley and his team rob an armored van of bearer bonds, Hanna takes over the case. McCauley and his crew are nearly impossible to identify, let alone track down. But Hanna's network of informants and the details of each man's life--failures and dreams, betrayals and vendettas--generate clues Hanna is able to discover. Soon, Hanna and his detectives and McCauley and his crime partners are driven towards a collision from which only some will survive.

This news helicopter is shown grounded by the LAPD after the armored car robbery as it captured part of the heist on tape.

Lt. Hanna is dropped off at the hotel near the airport.

This airplane is shown in the background when Lt. Hanna chases Neil McCauley into the Los Angeles International Airport (LAX).

Wearing an AirCal livery, which had merged into American Airlines by this point.