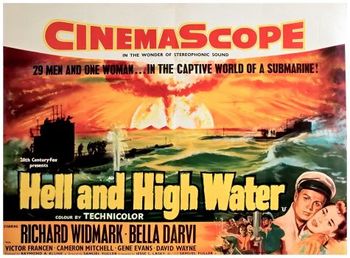 During the Cold War, a scientific team refits a Japanese submarine and hires an ex-Navy officer to find a secret Chinese atomic island base and prevent a Communist plot against America that could trigger World War Three.

If Orly is real, this Haneda is fictitious regarding the real airport.

Note the Lockheed Constellation in the background (on the right).

First as a painting due to a vision through binoculars. Two Superfortresses along an unidentified twin-engined tailseater transport airplane.