For other movies with the same name, see Kandahar (disambiguation). 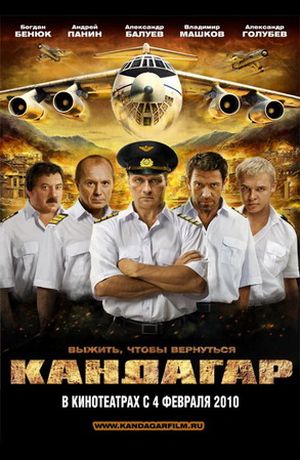 
On 3 August 1995 a Taliban Air Force MiG-21 aircraft forced a Russian Ilyushin Il-76 to land at Kandahar. The seven Russian nationals on board were kept prisonner until the 16 August 1996 when they were able to takeoff following a set of lucky events.

Unidenitified Ilyushin Il-76TD (of Trans Avia Export) acting as airframe c/n 1033418616 with registration RA-76842 from the real aircraft. The real involved Il-76 was built in 1994 and actually wearing the colors of Airstan, not those seen on the screen.
In 2010, the aircraft was full white with Авиакон Цитотранс (Aviacon Zitotrans) company name and the logo on the tail.
Today (2020), she's still flying and owned by the same company but with a white tail.

Including Airbus A300B4-120 reg. TC-OYC of Bosphorus European Airways (BEA) (with Sudan Airways airline title) alongside a Cessna 182 and another unidentified Airbus.

Manned by a Taliban pilot to intercept the Ilyushin Il-76.

Or Sukhoi Su-7 ? CGI ?
Both types were used by the Afghan Air Force. Praticising bombing Kandahar during low level flyby.