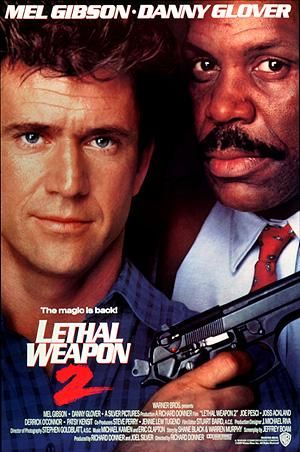 Whilst being posted on protective custody duty, Riggs and Murtaugh are attacked and embark on an investigation to find out who tried to kill them. Their protectee leads them to a diplomatic attache from South Africa who have some dirty dealings behind their credentials. After being told to stay clear, Riggs and Murtaugh conduct a personal investigation to take down the bad guys.

Used to extract two of the escaping South Africans from downtown Los Angeles. Somewhat amusingly, it sort of sneaks up on the LAPD during the firefight, and the sound of its rotors isn't heard until it actually physically appears from behind an overpass.

The LongRanger appears from behind the overpass. Apparently, it had been laying in wait for the South Africans.

Two of these are seen used by the South Africans attacking Riggs' trailer, showering it with automatic gunfire. One lands and Riggs kills everyone in it; the other chases Riggs' pickup truck but flies away after Riggs shoots its spotlight out.

This one has the (just visible) registration N300CE (which now belongs to an AS350D AStar). Same aircraft in other movies at IMPDb: Frequently Seen Aircraft.