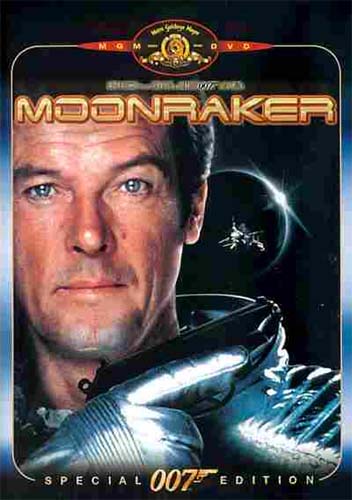 James Bond investigates the disappearance of a space shuttle.

James Bond arrives in Rio de Janeiro with a Concorde from Air France.

A Boeing 747 carries the Moonraker in the pre-title-sequence. When Drax´ men hijack the Moonraker, the 747 explodes. The model is featuring N905NA carrying copy of Enterprise OV-101 space shutle.

When Bond arrives in Los Angeles (Los Angeles International Airport), Corinne flies him to Drax's chateau with this helicopter.

In Rio de Janeiro, James Bond and Dr. Goodhead watch one of Drax' airliners which carries material for the Moonraker Program. The writing DRAX AIR FREIGHT is a fake of course, this plane was in fact property of the Brazilian airline VARIG.

When 007 arrives in Rio with the Concorde, a TransBrasil 727 can be seen taxiing to the runway.
In the 1970's TransBrasil was showcasing it's "Colorful Energy" series by painting each airplane in a different scheme. This particular 727, registered PT-TYU, c/n 19109/271, was painted in orange & green to represent oil.

When 007 leaves the Concorde, a Varig 707 can be seen parked between the Rolls-Royce and the Ford.