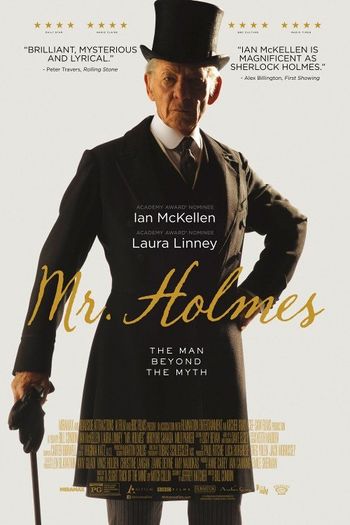 Action set in 1947. At the twilight of his life, Mr Holmes struggles to recall the details of his final case.

Roger's father was a mechanic but in favor of the outbreak of World War Two, he enlisted in the Royal Air Force and was selected for pilot training. He succeeded but her Bristol Blenheim Mk 4 was blown out of the sky on the first mission according her widow. But Roger is seen playing with a wooden De Havilland Mosquito.

Later, Mr Holmes is in Roger's bedroom where a picture of Roger's father with a Distinguished Flying Cross is placed on the chimney.
The room hides a Boeing B-17 hanging from the ceiling alongside a Supermarine Spitfire.

Near the window, a desk model of a Short Stirling (Mk IV ?). (bottom but not visible on this screenshot) On the desk is an uncunt paper airplane model set.