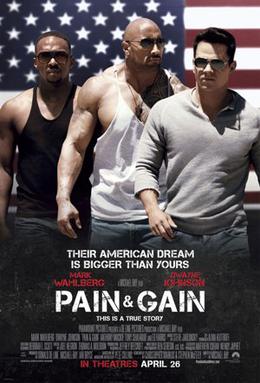 
The film is loosely based on a story published in a 1999 series of Miami New Times articles written by Pete Collins and compiled in Collins' 2013 book Pain & Gain: This is a True Story, which details the kidnapping, extortion, torture, and murder of several victims by an organized group of criminals that included a number of bodybuilders affiliated with Sun Gym.

Reg. N805MP Eurocopter AS350 B3 Police 5 of the Miami Dade Police Department.

Used as short-range armed interdiction helicopters from 2000 until 2008 (please note the machine gun and the FLIR under the nose). Look at the first screenshot of this page the lack of fenestron. Replaced later with MH-65C Dolphins.