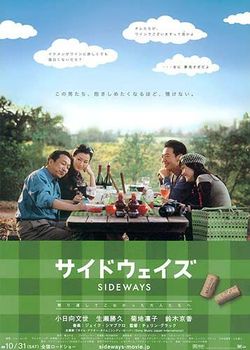 A middle-aged Japanese man travels to California to attend the wedding of his American-based friend. Prior to the big event, they take one last trip to Napa Valley, where they taste wine, dally with romance.

Airbus A340 of Air Tahiti Nui in the far background, two Boeing 747s of Northwest Airlines and Virgin Atlantic Airways at far right.

Two Boeing 777s, one of ANA and another of American Airlines, can be seen outside the window, presumably from an airport lounge at the Tom Bradley terminal of LAX.