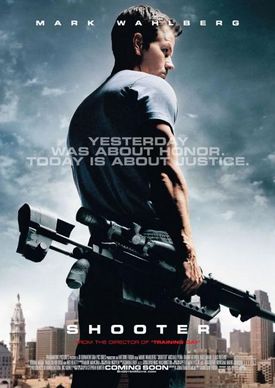 An ex-Marine sniper, Bob Lee Swagger, is framed for the assassination of a visiting Ethiopian minister to cover up the massacre of an Ethiopian village by the United States military.

A few are seen in desert camo at the US Army base in Ethiopia.

Another one later is used as an FBI helicopter, first to pursue Swagger through Philadelphia and later to fly the FBI out to the mountains in Montana. False registration NX-05K65.

An unmanned drone is seen used by the US military in Ethiopia. It appears to be entirely CGI rendered but a good representation of the RQ-1.

Ethiopian military gunship. Attacks Swagger and his spotter, Donnie, killing Donnie. Swagger destroys it by shooting its rotor section, causing it to crash.

FBI helicopter used to pursue Swagger through Philadelphia after he is fingered as the Ethiopian minister's killer. False registration NX-05K65 (identical to the FBI Twin Huey above).

Another TwinStar, unmarked and equipped with gun platforms, is used to try and kill Swagger and Memphis at a ranch in Virginia. Swagger takes it out by shooting a propane tank on the ground underneath it, causing it to catch fire and crash.

Still another FBI TwinStar, with fake registration NC-0S73, accompanies the FBI Twin Huey out to the Montana mountaintop.

Philadelphia news helicopter. Covers the FBI and Philadelphia PD's pursuit of Swagger after the assassination and is seen a few times afterward. Fake registration 11N59.

Another AStar serves as Senator Meachum's personal helicopter, unmarked with no visible registration.

Seen briefly during the search for the sunken FBI car Swagger stole and drove into the river. Says "Police" on the side but has different colors and livery from the LongRanger.

Johnson's helicopter which he and Payne arrive in to exchange Sarah for the recording of the real sniper's confession. It lacks visible registration, fake or otherwise.

Seen at the airfield the FBI takes off from.