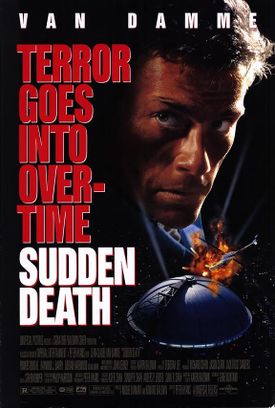 Darren McCord is a former firefighter who quit his job after he failed to save a little girl from a fire and couldn't live with his shame. Now he works as a fire inspector for a hockey stadium. As a special treat he takes his two children, Emily and Tyler, to see a Penguins game, which the Vice President of the United States is also attending. When a gang of criminals led by former Secret Service agent Joshua Foss seizes control of the stadium, taking everyone hostage and rigging it to explode, only McCord can stop them and disarm the bombs.

Two of these are used by the FBI in their attempt to take the stadium from the roof. One is shot down by Scratch.

Foss uses this helicopter at the end, but McCord shoots at it. Foss' pilot pulls back on the stick, causing the JetRanger to tilt backwards and stand on its tail in midair, then crash vertically down into the stadium. Registration N828BA, Serial 3426.