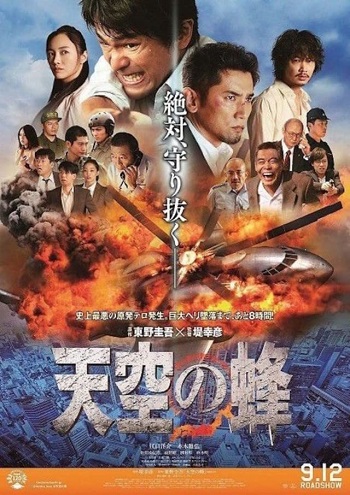 Engineers try to save a young child and a nuclear power plant from a helicopter guided by a criminal.

The titular "Big Bee" of this movie. In-universe this helicopter was supposed to be delivered to the Japan Air Self Defense Force. Looks to be based on the Sikorsky CH-53 family.

Reg. JA355E, c/n 9608, with false Aichi Prefectural Police markings. It should be noted that this specific unit was delivered in 2002 despite the movie taking place in 1995.

Reg. JA9616, c/n 33109; still with its civilian registration present despite the JASDF markings.

Another Bell 412, possibly the same JA9616; this time bearing the registration "JA5505" which actually belonged to a Beechcraft 18 owned by the Japanese Coast Guard that retired in 1981.

Most likely a radio-controlled model helicopter. Possibly the same one seen in The Cove?

While the movie claims this is Nagoya Airfield (known as Nagoya Airport in 1995, when this movie was set), it's likely another airfield is standing in for NKM.