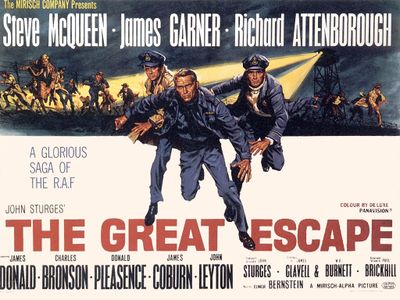 Allied prisoners of war plan for several hundred of their number to escape from a German camp during World War II.

Flown by Pleasence and Garner (acting as the pilot) in their escape attempt.

At least, seven T-6 were used to act as german fighters but never used in the air.

Seen on the wall in von Luger's office.

On the wall, on the right of the head, a memory picture with probably an Albatros fighter.
Hidden by the harm (on the left of the picture), probably a Pfalz aircraft.