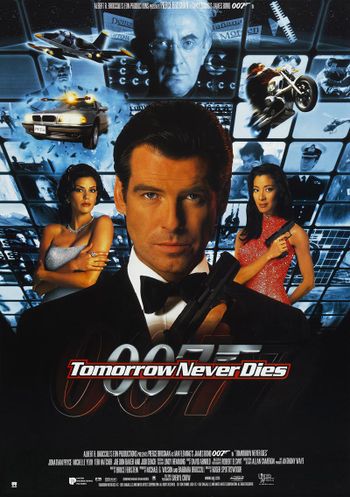 In the pre-credits sequence Bond is infiltrating a terrorist arms bazaar and tries to get away in this fighter plane which is carrying "Soviet SP-5 nuclear torpedoes" before the area is hit by a Royal Navy cruise missile.

Another Aero L-39 goes after him but Bond ejects his rear seat passenger (who tries to strangle him) into it, causing it to blow up.

This chases after Bond and Wai Lin's motorbike through the streets of Saigon. It is also used to take them to Carver's skyscraper when they are first captured.

These are referred to as Chinese MiGs. Carver's stealth ship sinks the British warship and shoots down one of the planes, triggering an international incident. These look like CGI. In real life the only MiGs the People's Liberation Army Air Force ever used were the MiG-9, MiG-15, a copy of the MiG-17, MiG-17 and MiG-21 (Chengu J-7, still in use today).