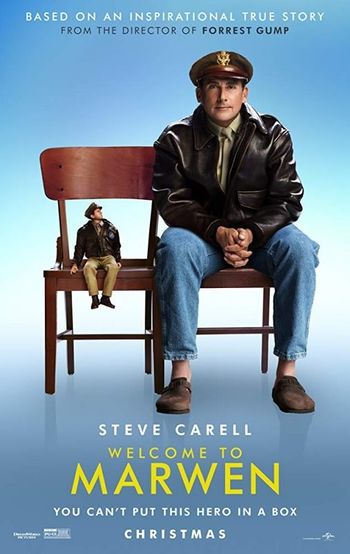 Later, the ⅙-scale fuselage and wings are dismantled and fixed on the wall of Mark's flat.

Mark Hogancamp house is full of painting and poster on various subject including a front view of a Boeing B-17. Read the discussion tab.

The ⅙-scale bar set has two posters with the Curtiss P-40 (1) and a red stamp featuring a twin-engined transport plane (2).
This stamp (both 6 and 15 cents are close to this color) was issued between June 25, 1941 and October 29, 1941. We guess a Douglas DC-3 but with the three-tail unit of the Douglas DC-4E prototype. It's not this Douglas DC-4E as this aircraft was a four-engined machine.

In the background several model kit are on the rack : ship, car, aircraft, ...
Read the discussion tab to find evidence of these blurred short appearance (no category link as they aren't significant).

The 2016 catalog with a clipper (Krusenstern Soviet -former German Padua- Sailing Ship) is from the Zveda company.