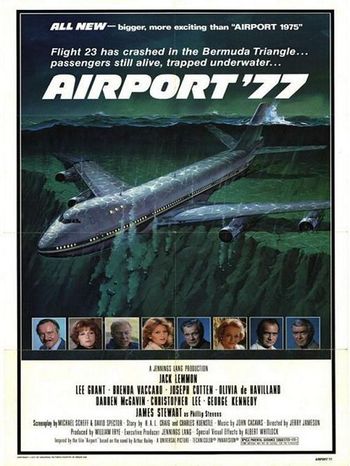 On the first flight of tycoon Phillip Stevens' luxury 747, art thieves mount a hijacking to steal the paintings being transported on the plane. However, they fail and crash the jumbo jet into the Bermuda triangle leading to the passengers being trapped underwater. The US Navy face a race against time and elements to save the passengers of the plane.

Helicopter used briefly by Stevens at the start of the movie to fly into his estate.

This plays the role of the Stevens corporation 747. If you watch carefully you will notice that two planes are used. At the start of the film when the plane comes into Dulles the plane has a black nose, in delivery of Northwest Orient Airlines, then a blue-white-red nose matching with an American Airlines airplane (see pictures below).

Seen on the cover of an issue of "Flying" magazine that is briefly visible.

In reality a 747 would be likely to float on the water due to the cabin pressure rather than sink as it does here.