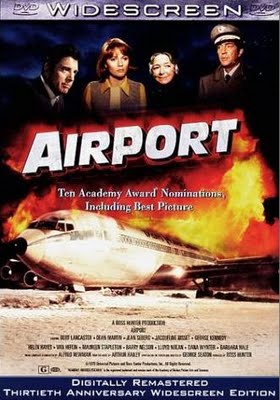 Melodrama set around the fictional Lincoln International Airport (Actually Minneapolis-Saint Paul International Airport (MSP/KMSP)) as it and its staff face various traumas. First of all a snow storm blocks the runways leading to an airliner getting stuck on them. Later on the crew of a Boeing 707 flying from Lincoln to Rome have to deal with a bomber on board and coax the heavily damaged jet back to the airport.

This jet plays the part of two different 707s. One gets stuck on the runway due to the heavy snow and the other is suffers heavy damage when a bomb is detonated on board leading to a difficult job for Captains Demerest and Harrison who are flying the plane. It wears the made for movie livery of the fictional Trans Global Ailines but in reality it was leased from Flying Tiger Lines. It later saw service with Aer Lingus, British Caledonian and Transbrasil.
Registration N324F. C/N 19354.

Model of a 707 used to discuss the effects of an explosion on board.

Boeing 727 seen taking off from Lincoln International during the opening titles.

Scale model seen on a desk. The SST was a proposal for a Super Sonic Transport aircraft that never saw full series production and remained as project without any prototype built.

Seen in an advertising picture for Trans Global Airlines.

More aircraft seen in pictures in the background.On top, an Avro 504K , and below, a SPAD S.VII.