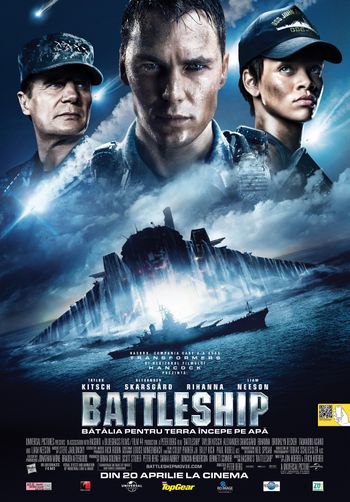 
Because of his lack of discipline, Stone Hopper (Alexander Skarsgård) forces his younger brother Alex Hopper to serve in the US Navy. During the Rimpac Excercise, Alex Hopper is a Lieutenant aboard the USS John Paul Jones, when five unidentified flying objects crash-land in the Pacific Ocean. The USS John Paul Jones, together with the USS Sampson and the JDS Myōkō are the first ships to arrive at the landing site. Unsure what to do, they are suddenly attacked by the UFOs, who turn out to be alien ships. Fearing the aliens are contacting a large invasion fleet, Hopper and his crew starts to battle the aliens.

Seen throughout the movie as the air support for RIMPAC and the battle against the aliens.

Seen at Pearl Harbor and getting destroyed by alien missiles.