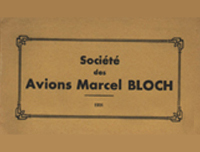 La Société des Avions Marcel Bloch (Marcel Bloch Aircraft C°), usually and simply named Bloch was found in 1928 by french ingenior Marcel Bloch.
Due to politics (nationalizations) and merging, the factories became part of the SNCASO in 1936 but the former and following aircraft still being named Bloch.
As Marcel Bloch has always authority on his design office, new aircrafts are too still named Bloch (or MB ...), like the four engine MB 160.
Following the military defeat of France in 1940, French aviation industry is ruled by the Germans and the MB 160 is eventually built by the SNCASE in 1942 (and so is sometimes named : SE 160).
Following the war and his imprisonment and underground activities, Marcel Bloch changed his name in Marcel Dassault in 1946, then applied this to his company on 20 January 1947. His next aircraft are then named : Dassault MD ... until the Mirage family.

This page shows a list of Bloch aircraft that have featured in films referenced on The Internet Movie Plane Database.

This category has the following 4 subcategories, out of 4 total.