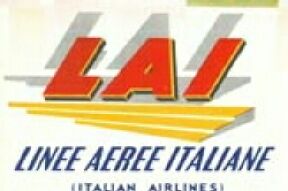 Linee Aeree Italiane-LAI was founded in 1946 for reboot of regular aerial lines in Italy after the end of the second world war. The ownership was fairly divided among the American aerial line Trans World Airlines (TWA) and the institute for the Industrial (IRI). The LAI began the operations in April 1947, flying from the airport in Rome Urbe toward the principal Italian destinations with Douglas DC-3. During the same year it also began the first international connections toward Athens, Istanbul and Tunisia. The LAI was absolute protagonist of the process of expansion of the Italian commercial aviation in the fifties. In 1950 it was the first Italian company to operate direct transatlantic flights toward the United States of America using a small fleet of Douglas DC-6. In coincidence with this event, the base of armament was transferred near the airport of Rome-Ciampino. The company merged to Alitalia-Aerolinee Italiane Internazionali in 1957 beeing renamed as Alitalia-Linee Aeree Italiane.