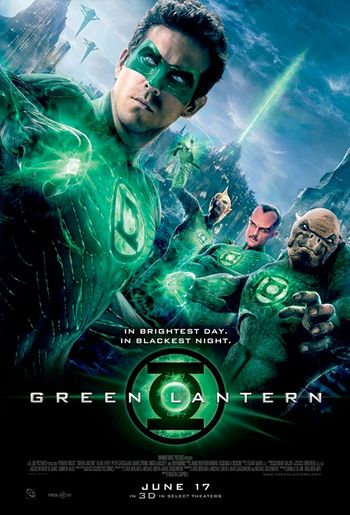 Hal Jordan is a test pilot. He proves that the new X-97 could be defeated but at a too high price. Fired, he's the witness of the crash of an extra-terrestrial vessel. The pilot dies in his arm wothout telling Hal his secret. But quickly, the ring recieved from the alien pilot changes his behavior.

With a Bell helicopter on the left.

Boeing has designed a contender to the F-35 which first flew as X-32 in 2000. This plane has nothing in common with the fictionous test plane seen in the movie.
A size 1:1 mockup has been built from a Northrop F-5 (landing gear and nose/cockpit), the wing being lift up over the jet intake. The rear looks like the Northrop YF-23, unsuccessful competitor of the F-22.

Various Aircraft in the Hangar

A newpaper's article displays a picture of Carol in front of a Northrop T-38 Talon.