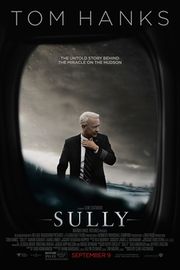 
The film follows Sullenberger's January 2009 emergency landing of US Airways Flight 1549 on the Hudson River, in which all 155 passengers and crew survived with only minor injuries, and the subsequent publicity and investigation.

Two former US Airways written off airframes (N648AW and N627AW) was bought and set to land and ditch action.

With a shot of the actual airframe in the Carolinas Aviation Museum during the credits.

Chesley Sullenberger has flashback of his first flight.
Registration NC787H, c/n 6002 built in 1930.

Continental Airlines and US Airways airliners seen at LaGuardia Airport (LGA/KLGA). The Continental airliners are actually CGI-ed over United Airlines planes, as Continental never operated the ERJ 170/175 or the 737 with scimitars.

Boeing 737 of United Airlines, Embraer ERJ 170 of United Express, Airbus A320 of US Airways.

An American Eagle Bombardier CRJ200 can be seen, with logos and titles removed, next to the A320.

Airbus A320 of US Airways & Bombardier CRJ200 of American Eagle.

Intrepid Sea-Air-Space Museum.
A pair of McDonnell Douglas F-4 Phantom IIs can be seen on deck. This is inaccurate, as the museum only holds one Phantom II.
Left, a McDonnell Douglas F/A-18 Hornet is seen from the rear. Others dark shapes in front of the lighted Intrepid castle are hard to identify.
In the foreground, we clearly guess the shape of USS Growler submarine with an erected SSM-N-8 Regulus (or Regulus I) on its deck.