The Gods Must Be Crazy 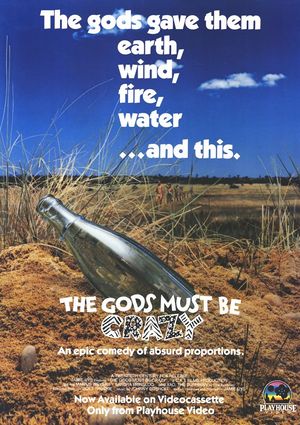 The Gods Must Be Crazy movie poster.

A pilot flying over the Kalahari Desert in Africa throws an empty Coca-Cola bottle out the window of his plane. It is found by a tribe of Bushmen who take the unusual object to be a gift from the gods. But because there is only one it breeds jealousy amongst the tribesmen until the elders tell one of their warriors, Xi, to take the "evil thing" away and throw it off the ends of the earth. Along his journey Xi encounters various "civilized" people.

Seen during the narrator's spiel about civilized man.

The plane whose pilot drops the Coke bottle. It is only seen briefly in one distant shot and one shot of the interior.

Easily recognized by the "throwover" control yoke and the double engine controls.

South African Air Force Aérospatiale SA-321L Super Frelon.
This helicopter is used by the military to try and locate Sam Boga's hideout in the banana forests. It is shot down by the terrorists using a bazooka.

Reg. N99210 Douglas DC-3A (c/n 1984 ?) with fiticious registration TN99210Z and Air Botswana name (but in the wrong place; on the real airliner, the company name was painted at wing section (on the right outer side of the screenshot)).
TN- prefix is for Congo not for Tanzania; and both countries are far away from Namibia nor the Botswana !

Too small screenshot with a Bell 206 wearing a registration probably of South Africa (ZS-?).